Almost a decade after the financial crisis, the banking sector looks healthy with candidates for growth at reasonable valuations

First it was housing. Then, sovereign debt. For a spell, it appeared that banks were simply lurching from crisis to crisis, so is it any surprise that investors have remained skeptical of the sector? But upon closer inspection, much of the turmoil appears to be in the rear view mirror, and the general health of the banking sector has improved materially. At least that’s the opinion of Brian Matuszak, senior portfolio manager with Munder Capital Management, a Victory Capital investment franchise. Closely monitoring the financials sector is among Matuszak’s responsibilities, and from his vantage point he sees several bank candidates poised to deliver steady growth. Among other factors, he cites strong credit quality and bank capital ratios at their highest point since the great depression. This is a great backdrop from which to pick stocks, he says, but as always the balance sheet details matter. 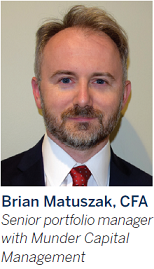 Q: People still remember the last crisis, but you say that the health of banks has changed materially. What do you see?

Brian Matuszak: Remember, going into the crisis the largest banks had dangerously low levels of capital with many levered 30–40x, while the smaller banks were far better capitalized. The banks with the most systematic risk to the economy, who were too big to fail, were allowed to take on the most risk, which is the exact opposite of what you would want from a regulatory standpoint. Today, that situation has been resolved. Banks with the most systematic risk are required to hold the biggest capital cushion while undergoing annual stress testing. We don’t like to see any bank operating at a capital level under 8% tangible equity-to-assets. Currently, the vast majority of banks meet this hurdle.

Q: You mentioned acquisitions. Will this be a potential driver for returns going forward?

Matuszak: I do think that the industry is ripe for consolidation. But because of the regulatory size “penalty,” there has been relatively little merger activity within the larger and mid-cap bank universe for the past several years. Most activity we have seen is undersized banks merging with each other. Given the current regulatory trajectory, smaller banks will likely remain at a scale disadvantage. Many are too undersized to keep up with the requirements for more secure infrastructure and technology investments. Those banks will have some tough decisions to make over the coming years on whether to stay independent or merge with a larger entity. 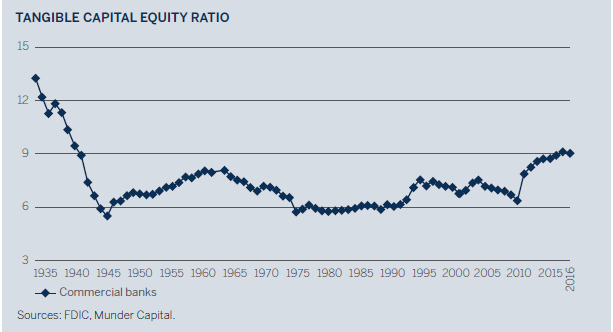 Q: What do you look for in a bank?

Matuszak: I think the number one factor should be a strong credit culture. With leverage, nothing can burn through capital faster than bad loans. We want to be sure that any bank or bank holding company we invest in has done their due diligence on the individual loans they make and has not allocated too much capital toward risky loan types. For example, during the financial crisis we found many banks with too much exposure to construction and development loans, and many of those banks are not around anymore. Today, a great deal of credit scrutiny is focused on energy-related loans, and it’s a risk we need to monitor. Interestingly, a good geography can help with credit as well. Banks operating in a strong economy have an advantage in managing their credits, but if the overall culture is weak or trends to the risky, it is only a matter of time before the bank will run into problems. The second most critical factor we look for is a strong deposit base. The stability of a bank’s funding base has historically been the most valuable part of the franchise. It is the reason most banks get acquired, and it’s what allows banks to borrow money cheaper than the Fed. A bank would rather have its funding mix consist of low-cost checking and savings accounts versus higher-cost funding, such as certificates of deposits, which tend to go to the highest bidder. With interest rates as low as they’ve been for the past eight years, there has been little cost difference between low-cost and high-cost sources of funds, but that should change if and when interest rates rise. Ideally, a bank would have sufficient infrastructure built that can be scaled to higher levels of profitability. In theory, a bank’s incremental return on equity could be extraordinary at scale. Imagine a bank earning a 3% net interest spread, at 12x leverage. Incrementally, it can generate a 36% return on equity. Of course, there are potential costs associated with new branch locations and loan offices associated with such growth, but that’s where a strong production platform and deep customer relationships become important.

Q: The Federal Reserve has been raising short-term interest rates, and more increases appear to be on the way. How might this impact banks going forward?

Matuszak: For now, the Fed has indicated at least one more rate increase this year and maybe three more rate increases in 2018, ultimately targeting a 3% Fed Funds rate by 2019. That’s the plan for the moment, though the ultimate trajectory will be data dependent. The impact really depends on the structure of a bank’s loans and funding. Many banks in our universe will benefit because higher rates allow them an opportunity to increase their spread income. In particular, those that target commercial and industrial business clients typically get paid a rate on loans that adjust with short-term interest rates. The higher the interest rate, the more clients pay. So the more floating rate loans a bank has on the books, the quicker they are likely to see the benefits of a rate increase. On the funding side, deposits typically take longer to reprice higher, especially for banks with more checking and savings deposits. So as short-term interest rates rise, we would expect the spread between loan yields and cost of funds to widen. We call this “asset sensitive.” But it’s important to understand that not all banks will be winners, so buying an index or investing indiscriminately across the sector may not pay. Fundamental research is key. For example, banks with a more thrift-like structure—those that hold long term residential mortgage loans funded through certificates of deposits—the outlook is not as good. Those banks are likely to see their spread income get squeezed as rates go higher because funding costs could increase faster than asset yields. The “liability sensitive” banks could be at risk. In general, we’ll be focusing on banks with strong and diverse deposit bases, attractive growth trajectories in both loans and deposits, historically solid credit underwriting, and those that are highly asset sensitive.

This material represents an assessment of the market environment at a specific time and is not intended to be a forecast of future results.

All investing involves risk, including potential loss of principal. Past Performance does not guarantee future results. The information and statistical data contained in this material were obtained from third-party sources believed to be reliable; however, Victory Capital does not guarantee the accuracy of the information or data, and the information and data may differ from information provided by Victory Capital. Any opinions, projections or recommendations in this report are subject to change without notice and are not intended as individual investment advice.